What is a conditioned medium of stem cells?

01 About stem cells and
conditioned medium of stem cells

02 About conditioned medium of stem cells at Smart Clinic Tokyo

01 About stem cells and conditioned medium of stem cells

You have likely heard the phrase "stem cells" at least once in your life, but most people have probably not heard of a "conditioned medium (CM) of stem cells."
A CM of stem cells is a fluid produced from stem cells,
and you’ll understand it only after understanding how stem cells work.
Here we’ll explain the capabilities of each function.

What are stem cells?

The power hidden in stem cells, creating various other cells

Stem cells are the cells from which all other cells with specialized functions originate. Just as a tree trunk divides into branches and then leaves, stem cells can create the various functional cells such as blood, muscle, and nerve cells that make up the organs and tissues of your body. 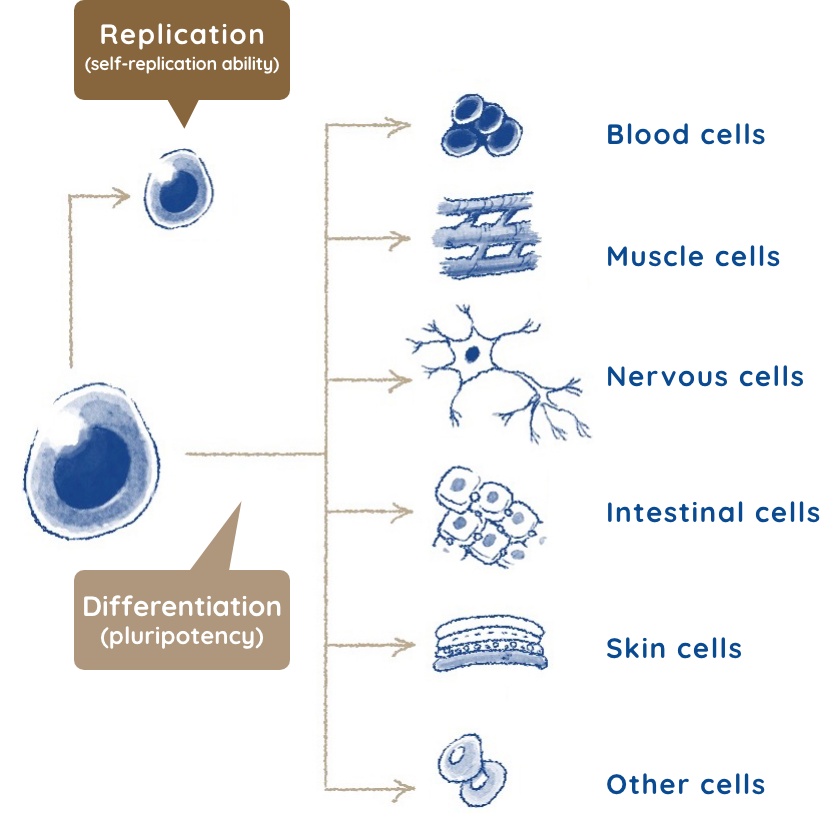 Stem cells – the only cells having both
ability to self-replicate and multiply.

Unlike functional cells, stem cells have the ability to divide over and over to create identical versions of themselves—known as self-replication. Additionally, they can differentiate into a variety of functional cells that are different from themselves. This is called pluripotency, and stem cells have both the abilities; self-replication and pluripotency, which is why they are the only type of cells able to create various types of cells. 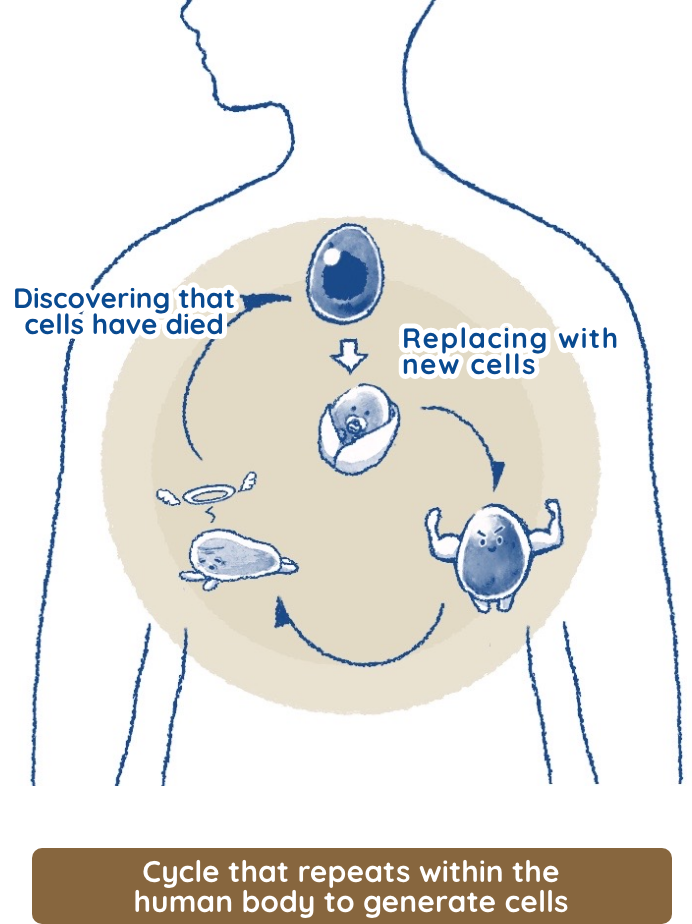 Stem cells’ ability to create new cells is why the body is able to constantly change and maintain a healthy state.

Our bodies always seem to remain in the same condition, but in reality, they are constantly changing. Functional cells, having the ability to maintain our lives, have a limited life span, and new cells are constantly born and replaced in the process of metabolism. 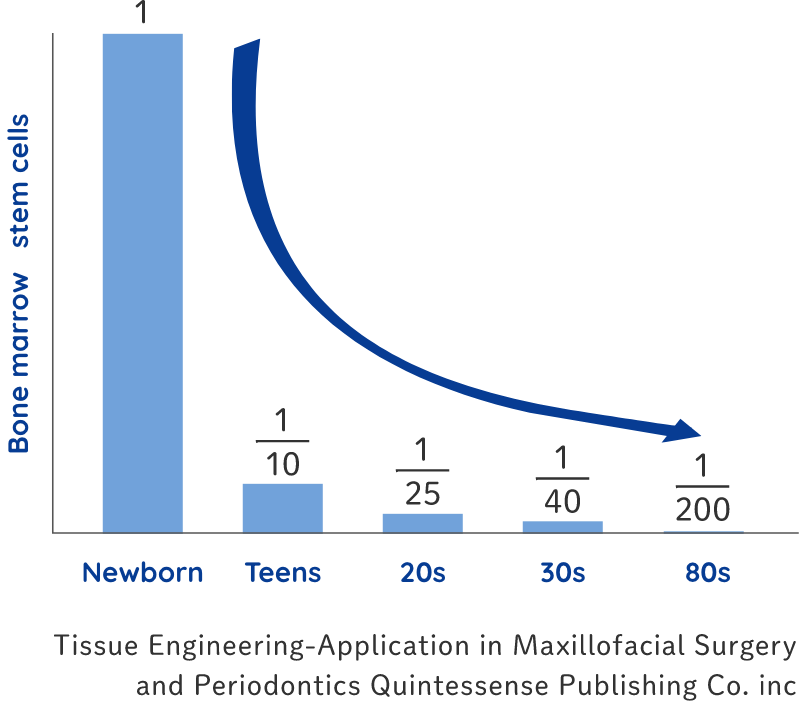 Aging is a decrease in stem cells.

Aging in the human body is linked to a decrease in stem cells.
Our bodies comprise around 37 trillion cells, of about 200 types. All organs and tissuesbodies being able to maintain life are made up of functional cells. These functional cells all have their own life span. As they reach the end of their life, these cells die, whereupon the stem cells create new cells — a cycle that is constantly repeated to maintain our health.

For example, when compared to the number of cells in a newborn baby, mesenchymal stem cells in bone marrow and fat are reduced to 1/10 this number in a teenager, and to 1/200 this number in an 80-year-old. As we age, the number of stem cells decreases, and this makes recovering from wounds and fractures more difficult. Even though the number of these cells in an 80-year-old is only 1/200 that of a newborn, they are still present and have a regenerative ability. For the very last sentence.We have high hopes that regenerative medicine can utilize this regenerative ability to the maximum.

Column This "Regenerative Ability" — why do lizards’ tails grow back? 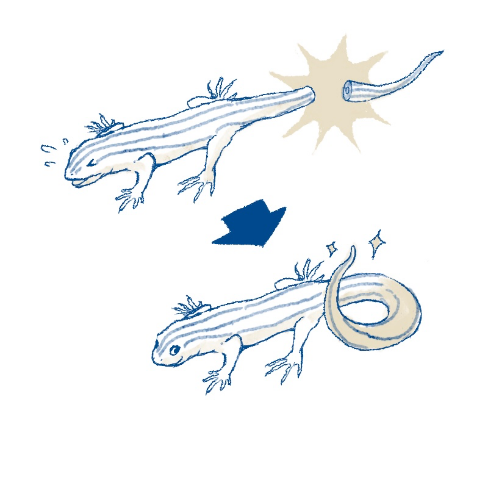 We all know of lizards’ ability to shed their tails to escape from predators or when they feel threatened, and of their ability to grow their tails back from the cut part. This grows back to the same size as the original tail. Since so many stem cells are contained in the lizard’s tail, they begin to gather all at once and correctly regenerate the lost part of the tail.

What is a conditioned medium of stem cells? 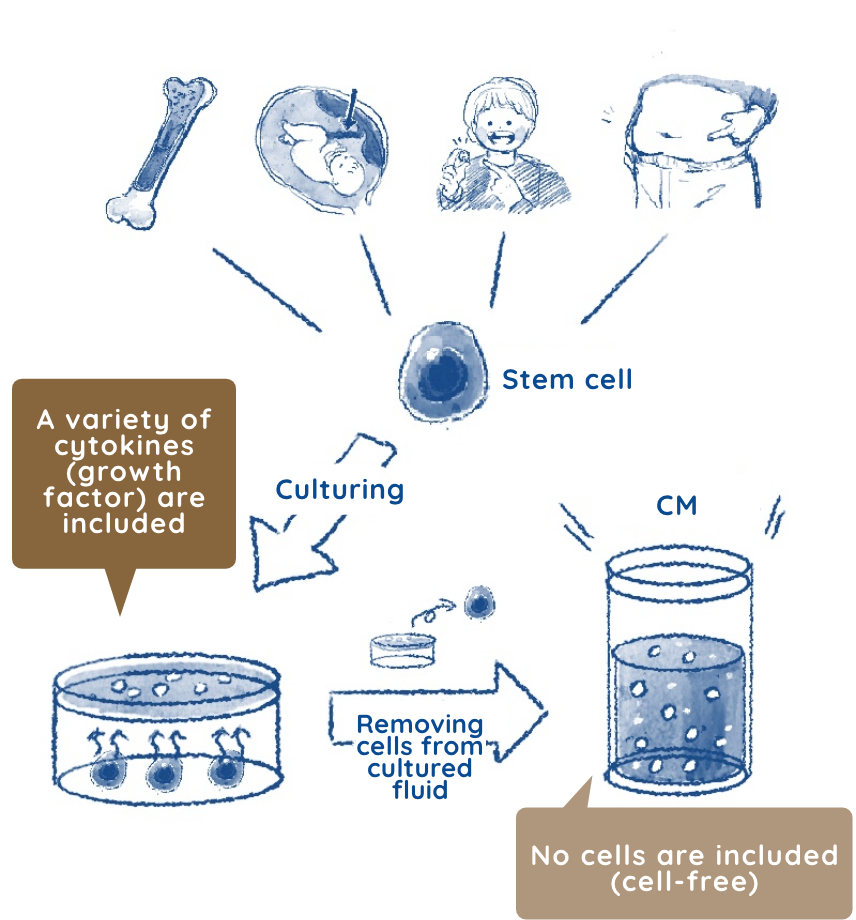 CM of stem cells — an important role
in cell regeneration

A CM of stem cells is the supernatant solution purified in the process for culturing these stem cells. In conventional research and therapy methods, stem cell transplantation has been performed by culturing stem cells and transplanting the proliferated stem cells. However, Dr. Minoru Ueda of the Graduate School of Medicine, Nagoya University, who had doubts about its effectiveness and safety, discovered the presence of a large number of cytokines (growth factors) in the supernatant, and these cytokines have been playing a critical role in cell generation. 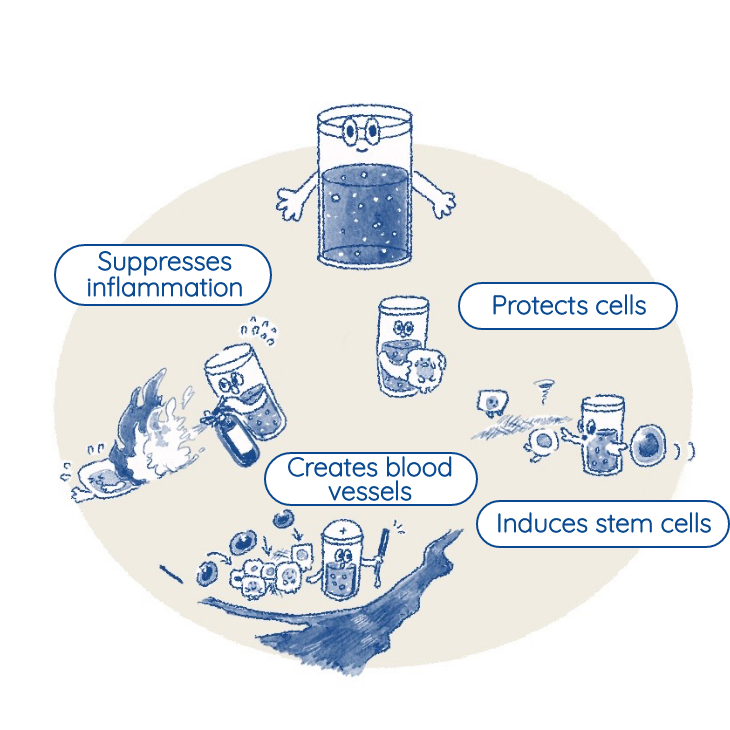 Four important roles played by a CM of stem cells

A CM of stem cells contains a number of biologically active substances, and these are believed to have the following four major biological effects of cytokine expected to adjust the environment of tissues and organs.

Diseases that may benefit from the CM

Conditioned medium therapy is safer due to cell-free therapy.

The diagram below compares the processes of stem cell therapy which has been mainstream method, and conditioned medium therapy. Both aspire towards having the same effect, however their therapy processes are very different.
Conditioned medium therapy has many advantages over stem cell therapy, which increases the opportunities for promising therapy for a wide range of patients and diseases. Additionally, this therapy is extremely low risk (i.e., cancer risk) as a conditioned medium does not contain cells (cell-free). 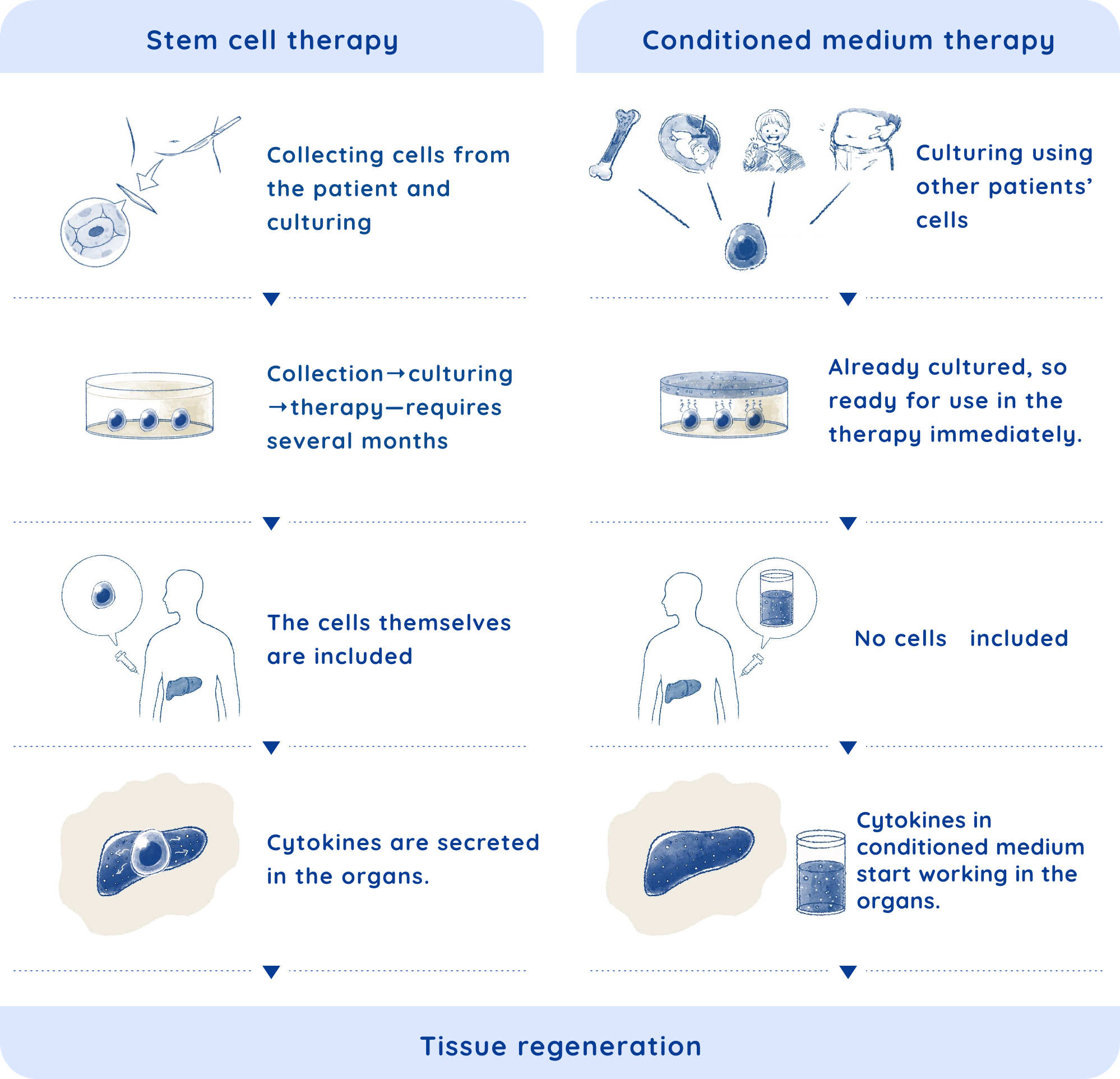 02 About conditioned mediums of stem cells at Smart Clinic Tokyo 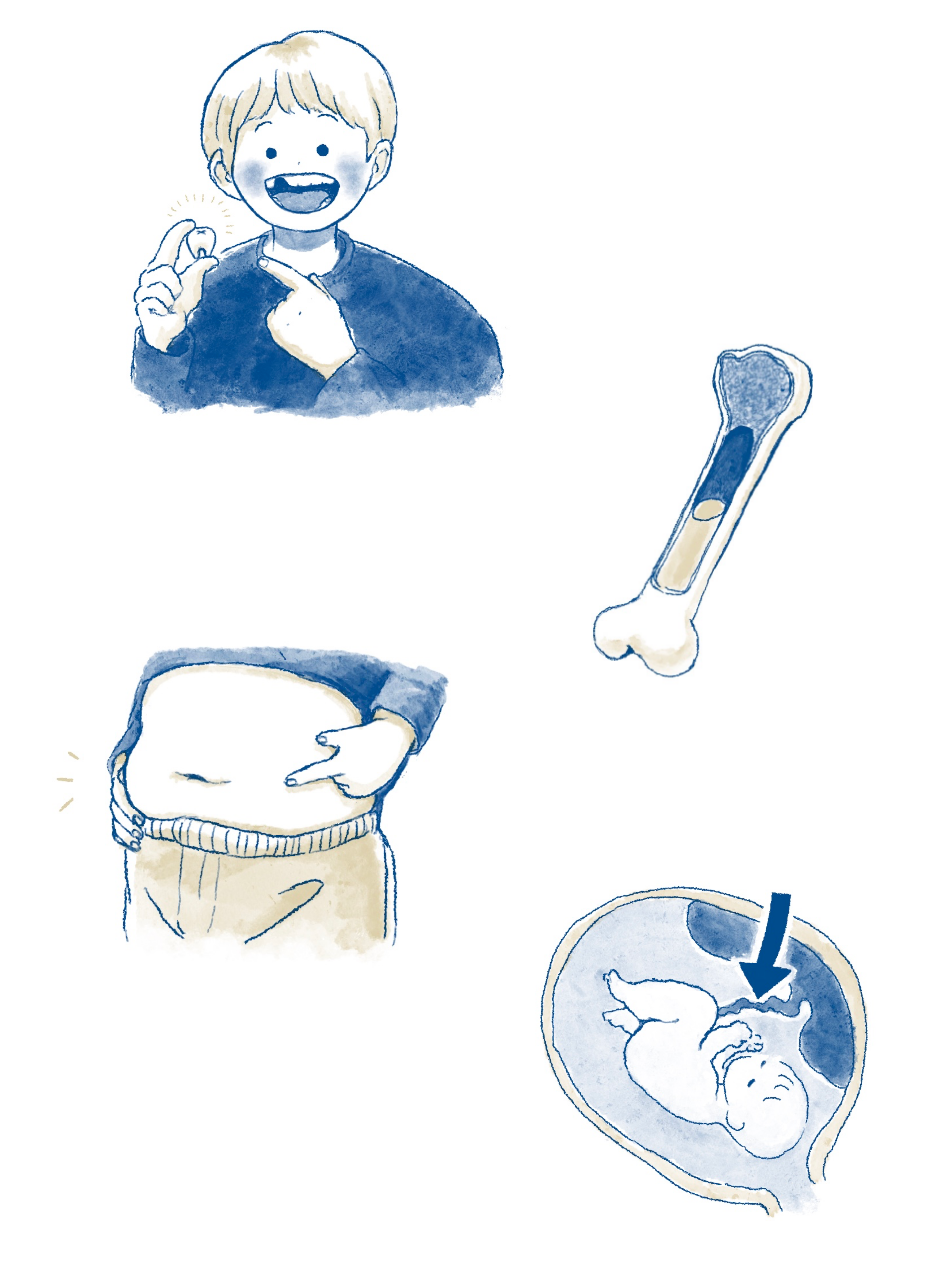 Wide variety of cytokines
Expected to be effective
for various diseases

At our Clinic, we use a CM produced from 1) "Deciduous Tooth Pulp-derived Stem Cells" (SHED-CM). The reason behind this is that the growth factors (cytokines) secreted by these deciduous tooth pulp stem cells are relatively more abundant than those of other stem cells, secreting a wide variety of cytokines, and these are expected to be effective in treating various diseases. Our clinic uses tooth pulp stem cells collected from a 10-year old Japanese child.

It has been found that there are about 300 types of cytokines (growth factors) in our SHED-CM secreted by the CM of stem cells. Of the 300 cytokines, major cytokines playing key factors for regenerative medicine are detected such as VEGF, promoting angiogenesis, TGF-β, having an anti-inflammatory effect, and Nidogen-1, an anti-apoptotic effect. Additionally, our SHED-CM contains a large number of cytokines called M2 macrophages having the capability of suppressing inflammation and immunity in order to avoid dangerous conditions for various cells. These cytokines show promise in therapies for various diseases.

We have carried out to culture cells at our cell processing facility in Japan after ensuring no infection of bacteria, fungi and viruses in accordance with General Rules for Human Derived Ingredients in the criteria of Japanese Standard for Biological Ingredients determined by the Ministry of Health, Labor and Welfare. Also, we have confirmed the following safety test and all were negative.
1) Sterility testing
2) Mycoplasma testing
3) Endotoxin testing
4) Cultured cell absence testing
(HBV/HCV/HIV/HTLV-I/HIV antigens and antibodies/RPR/TPHA)